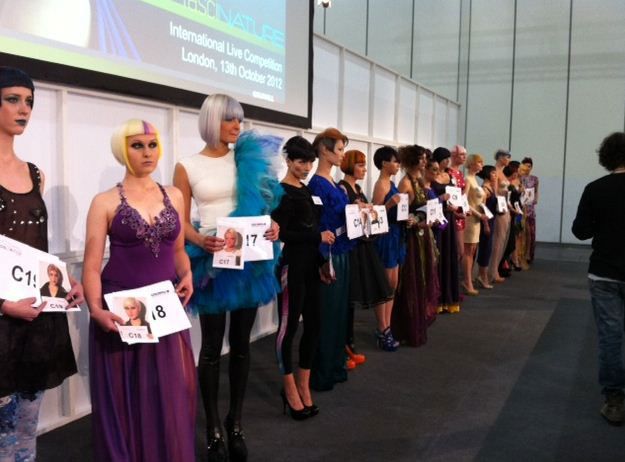 "Learn to step away from the hair," says Lisa Shepherd, the recently named
British Hairdresser of the Year (the first time ever a color expert has earned the title). Lisa adds that title to so many others, including the British Haircolorist of the Year for 2003, 2004 and 2005.

I met with Lisa at Goldwell's most recent COLOR ZOOM in London where we were both honored to be among the 8 international salon professionals invited to judge the competition. What makes COLOR ZOOM unique is that competitors make it to the live competition after submitting photographs. The finalists are asked to recreate their work....based on the photo...in a three hour live competition. Lisa served as a technical judge and I served as an editorial judge.

All of the judges were shocked at how few competitors were able to recreate the images seen in the photographs...which prompted Lisa to say to me, again, the competitors must "Learn to step away from the hair. That's one of the hardest things," she says. "You just want to keep getting in there and fixing, but before long, it's ruined."

For me, that happened in two of the categories. One of my favorite looks in the New Talent category was ruined simply because the dress was changed. The new colors were disrupting and took away from the hair. In the Creative category, one of my top earners was truly disappointing when live. The hair had been over sprayed and came off looking like a weapon.

On a more positive note...some turned out to be true winners in the live part of the competition. A few entries that didn't even place in the photo division earned high marks in the live segment. Because we were able to look at all sides of the head, we were able to see true talent and technique...some areas that could be hidden in a photograph.

Lisa agreed to share her thoughts and offer some tips to all competitors. In this video, she gives some great ideas for entering live competitions. Also included, the models, in each category, as they looked live to the judges.