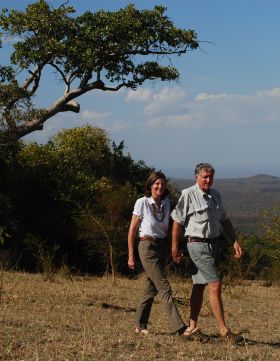 In eastern Africa, Philip and Katy Leakey live in a tent among the Maasai people. The youngest son of famed paleoanthropologists Drs. Louis and Mary Leakey, Philip and his artist wife Katy, combined their passions for art, the environment and the people of East Africa, by forming the Leakey Collection.

The enterprise provides work opportunity to approximately 1,400 Maasi—predominantly women—who hand produce products from natural sustainable resources for the main street markets of the United States and Europe. Over the last 10 years, the Leakey Collection produced a variety of products from jewelry to home accessories, but the Leakeys felt a consumable product, such as skin care products, would provide a continuing demand, helping them ensure long-lasting support to these rural women. They Leakeys began studying the natural resources of the area and discovered that the oil produced from the Marula fruit was a fast-absorbing and long-lasting moisturizer with anti-microbial and antioxidant properties.

“Among the Maasi, women are often left behind to fend for themselves when men follow the cattle,” says Katy Leakey. “When these women start their own businesses and bring home money, they gain more respect in their community and their home, their children receive educations and domestic abuse ends.”

Katy, who likens The Leakey Collection to the Ralph Lauren of Fair Trade, hopes the consumable-products arena will help the enterprise grow the number of women they aid from 1,500 to 10,000 in the near future, and they are pinning those hopes on Marula Oil.  And, since the oil is produced from fruit that has fallen from trees that occur in area naturally, there are no farming processes that alter the environment.

The  Marula oil itself is considered a medical-grade hydrator, and it’s getting some serious notice. In a study conducted on the damaged skin of 24 radiation patients by Dr. Ashton Kaidi of Newport Beach, California, Kaidi found skin healed three times faster in areas where Marula Oil was topically applied. Launched at a New York show this past January, the oil already is being sold by Fred Segal, Bendel’s, Dermstore.com and a handful of exclusive spas. 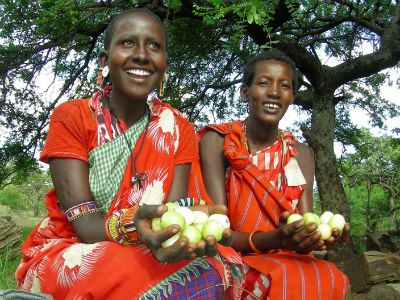 The biggest change the oil is making though is in the lives of the women who gather the Marula fruit. “We’ve learned that when women began making an income, they first take that money to educate an additional child because frequently they can’t afford to educate all their children,” says Leakey. Next, they buy a goat, because a goat will have two kids a year and the women quickly triple their money. Finally they use the money to launch their own micro-business, such as a small restaurant or a roadside kiosk sewing machine.”

The Leakeys also have witnessed groups of between 10-13 women joining together to form an investment council by all contributing funds then deciding as a group how to invest it. “One of the first things these councils do is buy roofing for women’s houses,” says Leakey. “Women here build the homes with mud walls and thatched roofs, and older women who can no longer climb up and repair those roofs become a burden for the family. When they can put corrugated tin roof on the hut, then that elder female is not so dependent on her family.”

“It’s been a very, very humbling experience and we realize it takes everyone to make it happen, but it’s been gratifying to see the potential for significant change in the lives of these women,” says Leakey.