In early 2004, stylist Jill Etzold Kester was diagnosed with stage 4 breast cancer, and although she fought hard, she lost her battle that October, leaving behind two young daughters. She was just 43 years old.

Kester worked at Artistic Hair, owned by Barbara Nolasco, in Orange County, California. Like many other salons in the 1990s, Artistic Hair had been inspired by MODERN SALON’s Mirror Image campaign to organize an annual cut-a-thon for breast cancer awareness, and since its first event in 1998, which raised $1,500, Nolasco had donated the money to the American Cancer Society.

“Shortly before she died, Jill and I were together in her hospital room, and she was adamant about me starting a foundation for stylists in her condition,” says Nolasco. “Jill had always been involved in our cut-a-thons and she thought the money could aid stricken stylists who struggled to pay bills when they couldn’t work. Our 2004 cut-a-thon was our most successful, raising $12,000. A week later, Jill lost her battle.” 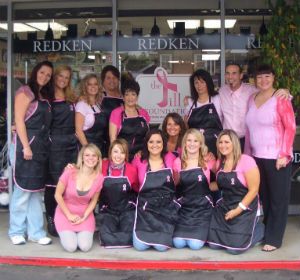 Nolasco made Jill’s dream a reality, when she launched The Jill Foundation, a not-for-profit organization that aids stylists in Orange County who are facing breast cancer. While the cut-a-thon remains the foundation’s main fund-raising tool, this October Artistic Hair is getting help, as four other local salons pledged to help raise funds in a joint event.

“Typically, hairdressers don’t have great insurance, and as a group, we avoid going to the doctor which means we find out about illnesses like cancer later when they are more difficult to treat,” says Nolasco. “This industry is so giving, and we thought it was time that we unite and work together to help our own.”

While the foundation is still in its infancy, Nolasco has plans to grow the effort and reach of the foundation. “We’re taking it slow, but who knows what this could become.”

To find out more the foundation and how your salon can get involved, visit thejillfoundation.org.