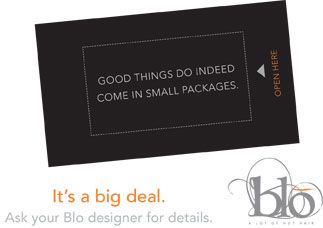 Like most salons, The Hair Spa is accustomed to giving donations to schools and charities that request them for events, but Lehansky knew only that the marketing effort usually only attracted the attention of the recipient. “We wanted to reach out to everyone, so now with every gift certificate we donate, we ask the event coordinator how many guests will be attending, give her that many card vouchers, and request they be taped under each chair,” explains Lehansky. “When they announce that vouchers are under the chair, that’s about five minutes of free advertising to an average of 300 people in attendance.”

Lehansky uses Vista Print to print up the business card-sized vouchers, and the offers vary from a free manicure, eyebrow wax or deep conditioning treatment to $10-off a more expensive service. “Not only is this an inexpensive marketing strategy, it creates buzz for our business as a supportive community merchant,” says Lehansky. 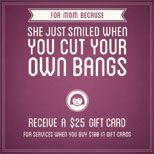 To boost business the weeks following Christmas, Shear Express launched a pre-Christmas campaign that boosted gift card sales, drove traffic into the salon during a slow period and brought holiday cheer to guests. Starting November 1, guests with tickets of $100 or more were invited to open a red or green envelope hanging from the salon’s Christmas tree. Envelopes were fi lled with certificates, including free manicures, a free chemical treatment with the purchase of a color service, or free products with a color and cut service. Certificates had to be redeemed between December 27 and January 8. In addition, clients received a $10 bounceback certificate to redeem those weeks if they purchased a gift card of $50 or more. 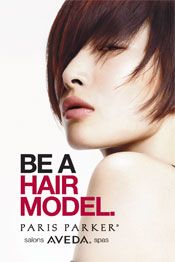 Be A Hair Model

To help get new stylists booked, trained and busy, Paris Parker developed this business-growing campaign camouflaged as a fun, free event in which clients get the chance to be a hair model. The goal was to create buzz around recently graduated stylists, helping them get booked and get on-site training to learn the “soft skills” necessary to be successful. who were styled by new team members,” says Neill Baker.

“This campaign cost $670 to date and drew in 1,764 clients who were styled by new team members,” says Neill Baker.

Taking a multi-dimensional approach and engaging various types of media, Salon Concrete strikes a great impression by giving potential guests an inside look at what is happening in the salon. After surveying its Facebook community, the salon learned most fans wanted to see in-salon pictures. Salon Concrete responded with a campaign of photos and videos disseminated through social and style photos; photo shoots in action; and everyday finished looks on salon guests. In addition, the salon began filming several salon guest testimonials that were posted to Facebook. Another website video shows the staff at work while revealing personal details about each team member, such as their favorite foods or music. Owner Christine Zilinski also comes on camera to talk about what makes the salon unique and different. A corresponding print ad campaign helped new guests connect with staff by introducing readers to individual staff members by sharing fun, personal details.

To help combat all the challenges hairdressers face in offering retail to guests, Blo developed the Think Small Campaign. Not only did the campaign promote Blo’s branding, it was an interactive activity for clients that triggered an impulse buying decision, while simultaneously leveraging the salon’s philanthropic efforts. The campaign—which was promoted through in-salon signage, e-blasts, social media, and the salon’s blog—was comprised of 4,000 sealed cards which included one of eight different offers. Two of the offers are travel-sized product giveaways; one is a $10 off a tool; one is $5 off any brush; one is a coupon off a Pureology product; two are coupons for Redken products; and one focuses on philanthropy.

Before a stylist takes a guest back for their appointment, he or she encourages the guest to draw a Think Small card out of the fishbowl. After the consultation, the designer invites the guest to open their Think Small card to see what they’ve won. “This gives the designer an opening into a conversation about how the guest can redeem that savings, as well as establishes a focus for the rest of the appointment,” says Nunes.

In an effort to maximize the promotion, one of the cards donates $1 in the winning guest’s name to an organization committed to assisting citizens in the county living with Autism. Once all $500 cards were drawn for this offer, Blo donated a check for $500 to the organization and created an in-salon poster, eblast, and social media campaign with names of all 500 people who withdrew that card. 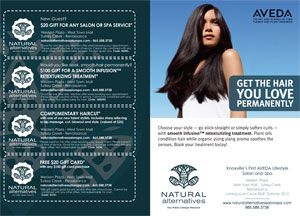 When creating its Mother’s Day campaign, Tonya Jones Salon Spa wanted to tap into the emotional connection most people feel for their mothers without getting lost in a sea of flowers and sweetness. So, working with Imaginal Marketing, the salon used humor, because humor-filled campaigns have the highest recall in marketing. Consisting of a series of relatable, fun messages of why we love Mom, such as “For Mom because you are solely responsible for her gray hair” or “For Mom because she just smiled when you cut your own bangs,” the campaign was designed to tip gift card purchasers to the next level of spending. Its multi-pronged approach incorporated website updates, e-mails, social media posts, and in-salon signage. “Our average gift card sales typically hover around $75, but this promotion helped bump those sales up 25 percent,” says Jones.

BEST INCORPORATION OF A NATIONAL CAMPAIGN/CO-BRANDED

Get the Hair You Love Permanently

Natural Alternatives combined powerful Aveda imagery with its own locally prominent branding to create two, two-page print ads. Knowing that a multi-product ad would result in 30 percent more sales than a single product ad, the salon offered four incentives to potential guests. One coupon offers a new guest a $20 gift for any salon or spa service, a second offers $100 off Aveda’s Smooth Infusion Retexturizing Treatment, a third offers a complimentary hair cut with a new talent stylist and a fourth gifts a $20 gift card with the purchase of a $100 gift card.

“Not only are the coupons coming back regularly in the four areas, we are reminding each reader of the range of our services and allowing them to try something new at a discounted price—making it safer for them to get out of their comfort zone and try a new service,” says Nica Hampton. 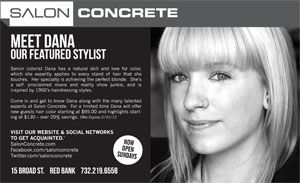 When Nuovo Salon Group celebrated its 25th anniversary in 2011, it partnered with Saks Fifth Avenue and the Ringling College of Art and Design to host a glamorous fundraising event on November 11, which benefitted the Sarasota Museum of Art. For the event, Nuovo stylists worked on photo shoots with talented fashion photography students at Ringling College to create a fabulous photo exhibit for the event. Saks Fifth Avenue hosts an over-the-top fashion show, and the hosts mixed it with cocktails, small plates, dancing and an array of desserts.

“This was a great promotional event for Nuovo and it generated amazing media coverage as a premiere evening of fashion, style and art—a social event in Sarasota that was not to be missed,” says McKee. “The gala solidified our image as Sarasota’s most cutting-edge hair styling experts and exemplified the spirit of philanthropy and artistic expression.”