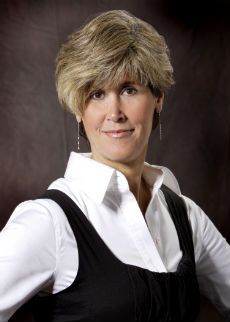 On May 16, Pivot Point's Corrine Passage Bernin, 50, passed away in Evanston, Illinois. Bernin, who served as the company's senior vice president  of production and systems development, was the only daughter of Pivot Point founder Leo Passage, who passed away May 11, 2011.

“Corrine was fresh out of college when she joined us in the publishing department,” says Pivot Point Vice President of Education & Research Judy Rambert. “She earned her hairdressing license as a teenager, and with a new journalism degree, Corrine was a perfect fit for our editorial team. When we needed a fresh critique, we could count on Corrine. Her honest, straight forward approach remained an important gift throughout Corrine's career.”

Bernin's business strengths grew along with the company. She led Pivot Point’s initiative of documenting systems and procedures, enabling functions of the business to continually improve.

Married in 1991 to John Bernin, CEO of FrameOne Productions and PassionDrive Productions, also of Evanston, Bernin was the mother of two children, Jack, 15 and Jessica, 10.

Her passion for children led to her role as the driving force behind “Pivot Point Cares for Kids.” The widely recognized program inaugurated in 1997, has raised more than $1 million for The National Center for Missing and Exploited Children (NCMEC) through nationally-organized Cut-A-Thons performed by Pivot Point beauty students.

On May 4, 2012, the city of Evanston, under a proclamation formally announced by Mayor Elizabeth Tisdahl, declared May 4th Corrine Passage Cares for Kids Day in Evanston. This proclamation recognized Bernin’s fundraising efforts and dedication to Cares for Kids NCMEC.

“Corrine was extremely proud of her work in the Evanston community and across the country. She was instrumental in creating a company culture where community service is just as much apart of our focus as customer service,” noted Pivot Point CEO Karen Wilkin-Donachie. “We are dedicated to continue her efforts with the same spirit and tenacity she exemplified for us.”

One of Bernin’s fondest achievements was the recent completion of "LEO," a documentary on her father, produced and directed by her husband John. For many years, she encouraged both her husband and father to record the life of the founder of Pivot Point and his passionate contributions to cosmetology education. Since beginning Pivot Point in 1962, more than one million salon professionals have received a Pivot Point education.

The Passage family, including Bernin’s beloved mother Lenie, her brother Robert and the next generation, will ensure that the global Pivot Point Family advances the empowering mission that Leo Passage started 50 years ago and that Corrine Passage Bernin continued throughout her life.

Services are planned for Tuesday, May 22 at St. Nicholas Church in Evanston, IL. Visitation will be in the afternoon with a ceremony to follow.