If you’ve ever attended the intense Strictly Business education developed by Scott Missad and Frank Gambuzza, you’ve witnessed the not-so-subtle transformation among the salon and spa owners who attend the four-day program. 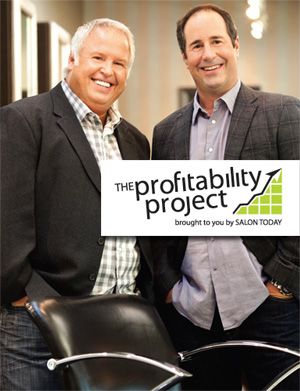 Most owners enter the first morning, riding a wave of bravado, comparing their number of staff members and sales figures with one another. By day two, they’re in a bit of shock as they compare their own numbers with the potential their businesses could be producing. That’s when they began to let down their guard, divulging their fears and frustrations with their own salons and staff members. By the final day, they’re in tears, filled with hope, and confident they’ll be able to achieve the sustainability, the freedom and the profitability they dreamed of when they first launched their businesses.

Missad, a former vice president of sales at Maly’s Beauty Supply, Redken 5th Avenue NYC and Beauty Alliance and the founder of the Agility Group; and Gambuzza, who with his wife Belinda owns the Salon Visage chain of salons in Knoxville, Tennessee, developed the business training program to offer superior consulting, technical and financial training for discerning salon and spa owners. In 2012, they’ll partner with SALON TODAY to bring their financial know-how and proven systems to a wider audience of salon owners through The Profitability Project. In a one-on-one interview with Editor in Chief Stacey Soble, Missad and Gambuzza describe the new venture and how it can impact the future for all salon owners:

ST: How did you team up, and why did you start Strictly Business?

Missad: It started around 1999, when I was working at ISR, a distributor in Florida. One of the things I had taken there from my former job at Maly’s Beauty Supply was belief that we would only be as successful as the salons we service. We always put a heavy emphasis on business-building, which was unusual at the time. So, we decided to create an intense business seminar for salons, charge $500 for two days (which was unheard of), and sell to no more than 100 salons. No one thought we could do it, but we sold out. We had speakers including me, Frank, Geno Stampora, Michael Cole and Gary Harlan, who owns NColor in Naples, Florida.

Gambuzza: To be honest, I didn’t think we would sell out either, but talk about magic. People had never looked at their business this way, and by the end, owners were emotional and going home with a sense of hope. It showed that people wanted great business information but had no place to get it. And it wasn’t branded with a manufacturer, so there was no other agenda but creating a better businesses.

Missad: We did the first Strictly Business with no intentions to do more, but about seven years ago we started doing extended, four-day seminars for Kerastase and L’Oréal salons, eventually partnering with Salon Summit Business Center, who does the follow-up coaching.

ST: What was your overall goal with this new kind of business education?

Missad: What we set out to do is redefine what success looks like for a salon. Salons often measure their success by how many employees they had or how many locations or the volume of their top-line sales—that’s all nice, but if you’re not profitable, it doesn’t matter.

Gambuzza: At the time, I would go to shows and hang with other owners and I knew my operation was smaller than many of the other owners, but I also realized we were making more money. It’s not about what you take in, it’s about what you get to keep.

Missad: It’s the difference between buying a job (a place you get to work in) versus owning a real company. You have to want to lead a company. We take salons from survival mode to success mode to sustainability. A sustainable salon is predictable, process-driven and highly pro table, regardless of whether the owner is doing hair or not.

ST: What is The Profitability Project, and what do you hope it achieves?

Missad: Our overall goal is to give owners hope, to show them that finding their way to profitability is not as complicated as they think. Through The Profitability Project, we’ll be partnering with SALON TODAY to bring our concepts to a wider audience through a monthly column/exercise in each issue, profit tips on MODERN SALON TV, best practice webinars, as well as live events. Frank and I will continue teaching Strictly Business for those who want to dive deeper and learn more.

Gambuzza: We hope owners will get to the point that every time they need to make a decision about their business, they consider the nancial implications—how it will impact their ROI (Return On Investment)—and that will help guide them to the right decision.

ST: When it comes to building a profitable business, where have you found most owners go wrong?

Gambuzza: It’s a simple answer really— they work on trying to keep individuals in the salon happy, as opposed to building a company. They make emotional decisions, instead of decisions based on numbers. They never calculate what numbers they need to make to pay for the decisions that they’re making. Then after a quarter or six months, they discover they’re broke.

Missad: They think they can ‘outwork’ any financial challenge by adding more people, more hours, more chairs, but they get themselves in a position that no matter how hard they work, profitability is a mathematical impossibility. They end up hiring staff who have people on the books, and end up paying too many commissions that are too high. And, often when they do look at finances, they look at the break-even point, without ever factoring in what they want to make as a pro t. Also, they fail to realize that retail and service are equally important when it comes to profitability.

ST: Salon Visage has served as the test salon for your teachings—how has it changed over the years?

Gambuzza: It really changed when we started making each individual accountable through total productivity. Then it no longer was our responsibility to make them successful. We quit accepting mediocrity, we expected performance—of course we gave them all the coaching, training and tools necessary to perform. But once we had measurable accountability, we leveled the playing field for all staff, and we created higher productivity and more revenue for them and better and more pro table lives for ourselves.

ST: How has the economy changed the game for salon owners?

Missad: As I often say, “Easy is over.” Owners can’t get away with the same mistakes, they don’t have that luxury. Owners are classic waiters, they wait for things to get better. But I don’t think things are going to get better–I think this economy is our new reality, in fact, it might even get worse. That doesn’t mean there’s not opportunity. But you’ve got to act, not react.

ST: When owners come to your seminars, what are they looking for?

Missad: It’s not always just about pro t. We usually ask them if their career and their company is at the level of excellence that they dreamed about when they first started. What was the dream? They are looking for the business practices they can put in place that will give them the dream.

Gambuzza: Speaking as a salon owner, they want hope, they want control, they want freedom, and they want an easier way to sleep at night.

ST: What kind of results have you seen with the owners you worked with?

Missad: We’ve seen some incredible results. For example, we’ve worked with one owner in Saginaw, Michigan—one of the most economically depressed areas in the country. When we first met her, she was close to closing her doors. She could have wallowed in how bad the situation was, but she implemented our systems, and soon, she was not only pro table, but she was able to get out from behind the chair and lead a business that was sustainable without her seeing clients. Six months after another salon in Royal Oak, Michigan, took the course, they were trending at a 46-percent increase on a million-dollar base without hiring any new hairdressers. That’s really impressive.

ST: What would be your New Year’s wish for all salon and spa owners?