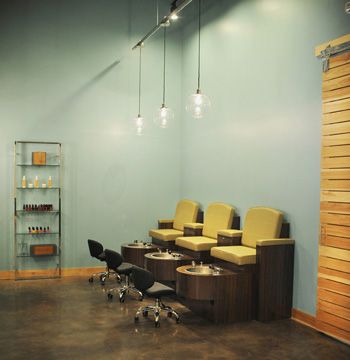 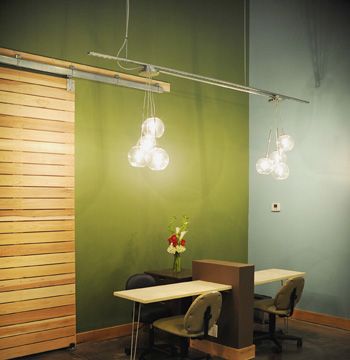 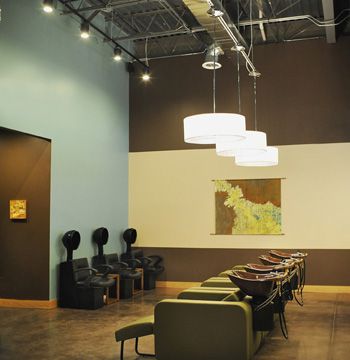 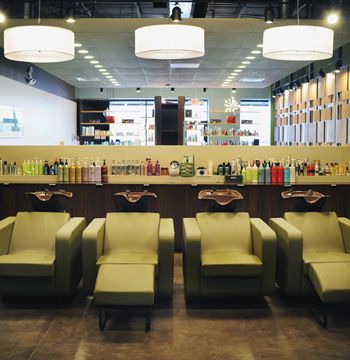 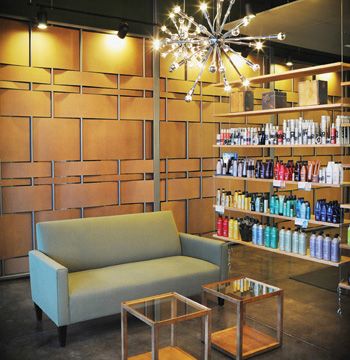 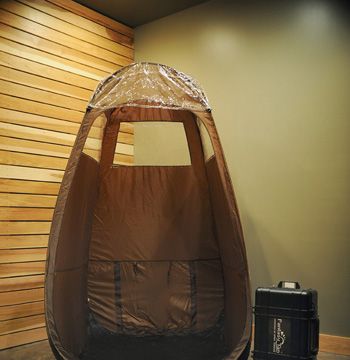 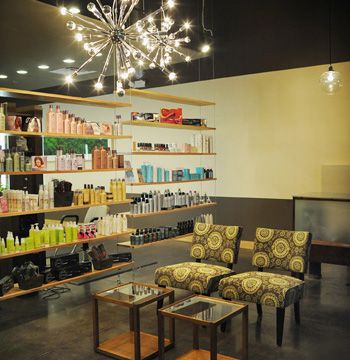 “This salon has an ‘eco-feel meets the Jetsons’ look. We love the creative use of color.”

BEFORE ANGELA WATNE and Suzanne Phelps moved their former small salon into its much bigger reincarnation, the duo dug in, did the research, and scouted locations for nearly two years before deciding on just the right space. “We finally found the space we needed in a nice strip mall, which has a movie theatre, several great retailers and easy highway access,” says Suzanne Phelps. “Our next goal was to create a space that felt like home.”

Stem Hair and Body Spa boasts a roster of long-time loyal clients. “Even though the new space was almost double in size, it couldn’t have a snooty feel,” she says. “It needed to feel soft and very inviting.” The owners accomplished the welcoming look with an open fl oor plan, thoughtful lighting, a soft color palette and its signature woven wall. “Our lighting is soft, fresh and fun, and it gives the salon another ‘wow’ element when you enter the space,” says Phelps. “It also really delivers the function we need to make all our clients look and feel great.”

The standout design element is a wooden, woven wall that separates the salon and spa areas. “In so many of the salons we toured, guests had to traipse through the salon areas to get to the spas, which were frequently located in the back or in the basement,” says Phelps. “We wanted guests to still feel included in the salon, but have a sense of privacy in the spa. When you walk into our salon, our spa door is in the entry and it takes you behind the woven wall, which isn’t solid, but does provide privacy.”

To save on the budget, Angela’s life partner Daniel Janssen served as general contractor, and he and his father built the wall after architect Kathy Ayers showed them something similar at one of her other job sites. “It was created by weaving lengths of MDF (medium-density fiberboard) through metal poles and securing the board ends to the poles,” says Phelps.

All in all, it’s working. “Clients are blown away by the new space, but we’ve also seen it inspire our staff in a measurable way,” says Phelps. “Many are taking much more pride in their work, and they’re hitting their numbers and jumping levels.”