A chance meeting at an industry event leads the management of two salons to temporarily trade places to share strengths with one another. 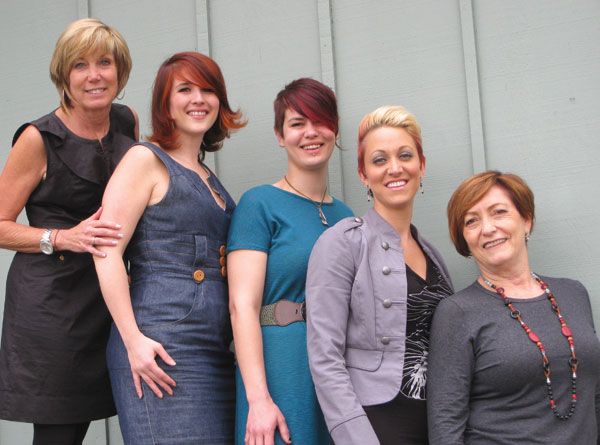 After reading Yin Yang Leadership, SALON TODAY's October 2009 cover story about the power of combining creative and analytical thinking in management, Gayle Fulbright, owner of Headlines for Hair in Encinitas, California, reflected on her own style. "It spoke to me," she says. "Being very analytical, I'd been throwing numbers at my staff for so long, I knew if I didn't throw in some creative exercise I'd have a rebellion on my hands."

After perfecting a retail system that yields $35,000 in monthly sales with a single line in 1,700 square feet, Fulbright has emerged as a frequent lecturer on retail strategies. But the thought of weaving some creative management into her approach weighed on her mind as she traveled to Eufora's Global Connection in November of that year.

At the conference, Fulbright met Lina Morra Lomangino, the owner of Michael's Hair, Body and Mind in Mississauga, Ontario. Lomangino's salon has a longstanding and growing record of creative wins. In addition to dominating Eufora's Sylist of the Year Award for four consecutive years, they've won Mirror and Contessa awards and have been named as finalists in the North American Hairstyling Awards. Over the long weekend, two owners slowly hatched a plan for an international salon exchange.

"Despite the fact that we have very different strengths, Gayle and I think very similarly," says Lomangino. "I always like to share business ideas with other owners, but to do so during a 10-minute conversation is challenging. The idea of swapping salons was brilliant."

In October 2010, the two salons embarked on an the exchange that would take the business savvy members of Headlines north to Canada and the creative minds of Michael's south to sunny San Diego. 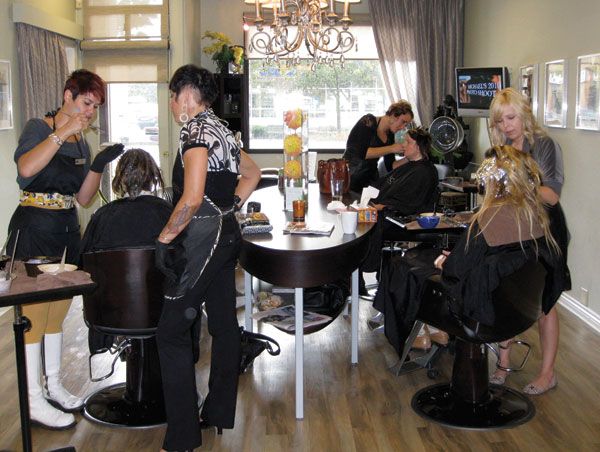 While working on clients at Michael's Hair Mind Body in Mississauga, Ontario, stylists are more mindful of their retail goals.

All Eyes on Retail

In October 2010, Fulbright and her salon manager Christina Krapf traveled to Michael's in Mississauga. After observing in the salon, they conducted one-on-ones with each staff member while the salon's management observed the meetings. Fulbright and Krapf carefully explained the different metrics, so each staff member could read and interpret their own numbers and they set individual goals for each service provider.

One of the goals of the meetings was to create an open dialogue between management and staff, to learn what staff members liked or disliked about the business, and to gather any ideas they could contribute.

Next, Fulbright and Krapf walked the Michael's team through their eight strategies of successful retailing. Since both salons retail Eufora, they shared the same language. "I went in and spoke to them from a stylist's point of view, and took â€˜selling' out of the equation," says Fulbright. "We taught them the difference between selling and educating."

For Fulbright, the proof is in the numbers. In August 2010, the average retail sales per client were $11.25. After the training, the average sales per client bumped up to $16.35. "My goal is to eventually get them over $20," says Fulbright. "That's where my own salon is at, but it takes time and a lot of constant attention." 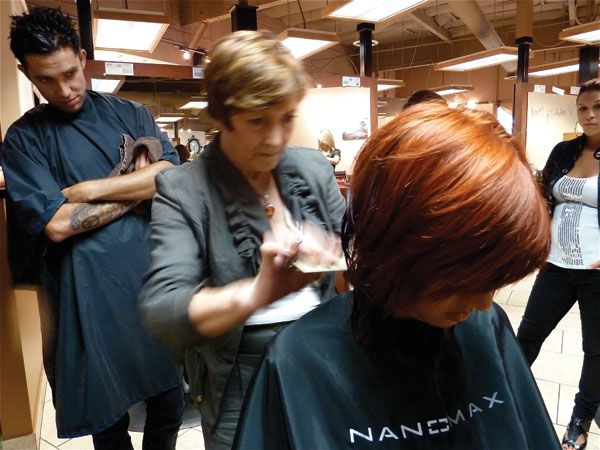 Stylists from Headlines observe as Lina Morra Lomangino, owner of Michael's, preps a model for the photo shoot.

The Michael's team illustrated how to find a concept for a photo shoot, how and when to prepare, and how to choose the right models. "We brainstormed ideas, talked about how to find a proper photographer and make-up artist," says Lomangino. "And we spent the week working on cutting techniques and color combinations."

At the end of the week, the Michael's managers and the Headlines team traveled to Hollywood, where they pulled off Headlines' first professional photo shoot. "We had an amazing photographer and the team was so enthusiastic, they did a great job for their first shoot," says Lomangino. "They learned so much from this first shoot that they can apply to the next experience and continue to grow." The experience left the Headlines team with a new brand, and many of the team members reported that the creatively stretching experience was life-changing.

While Lomangino and Fulbright had singular goals in mind when they brought together their teams, the learning experience permeated everything. To save costs, the owners stayed at each others' homes during the swap, and at night over a glass of wine they'd share management issues, ideas and solutions. "I loved being in her salon, I felt like I was in mine. Our personalities are so similar," laughs Lomangino.

"Even at her home, when I opened her fridge, it was like looking in mine"

In the salons, team members would work side-by-side, learning from each other. "It allowed us to pick up on small things, such as a different way to place foils," says Fulbright. "There was an excitement and an energy in the salon you could feel."

Since the original exchange, Fulbright has closely tracked Michael's retail progress, and the Michael's team already has fl own south for a subsequent visit. "We've developed a sister-salon relationship with them. It's awesome to work with a team who has very similar philosophies but different talents," says Spencer, who was instrumental in planning the exchange.

"Having so much physical distance between us takes the pressure off because we're not competitors. We're salon friends. The most valuable thing they taught us is it's about your team and not about you-if you build up a good team you can be far more successful than you can be by yourself."