Who says 2008 ended on a bad note? Even though SALON TODAY broadened the focus of the competition to include best practices, the SALON TODAY 200 as a class continued to demonstrate strong growth. In 2003, the average gross revenue was $1,025,730 compared with the $1,665,466 reported for 2008. Despite the economic crash, 2008 gross revenues demonstrated an average 21 percent increase over 2007-a few percentage points slower than years earlier, but still a healthy growth rate.

What's in a Name? 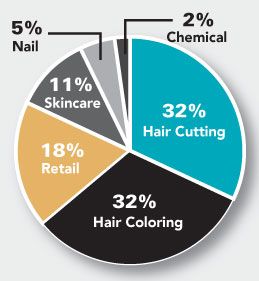 When the SALON TODAY 200 Class of 2010 looks at their gross revenues by category, hair cutting services and hair coloring services are head to head with 32% each, followed by retail sales at 18%, skincare and bodycare services at 11%; nail services at 5% and chemical services at 2%.

And, Breaking it Down

Unfortunately, what comes in also goes out. At 48% labor costs accounts for almost half of all ST200 expenditures, followed by supplies at 11%, rent/mortgage at 8%, taxes at 5%, marketing/advertising at 3%, and conventional employee benefits, education and training, utilities, professional services and insurance at 2% each. Owners did keep some of the pie, with 4% of the expenditures allotted for owner compensation and 6% making its way into profit. (Other responses accounted for 5%.)

The states with the largest number of ST200 salons were California, Pennsylvania, Texas and Ohio. Regionally, 32% of salons were located in the South; 30% in the Midwest; 20% in the Northeast; 17% in the West and 1% were outside the United States. Regionally, there were some interesting differences: