Learn to leverage the strengths of both analytical and creative thinking in your business management, and you'll not only boost the influence of your leadership, you'll grow your bottom line.

By Stacey Soble with Tom Kuhn 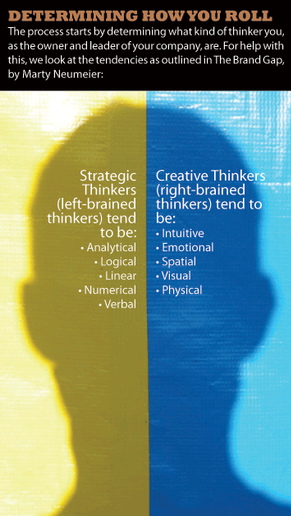 Discussing performance data with the staff, designing new services for the menu, tackling a tricky client complaint-take a look at any management decision you make and there's most likely both an analytical and a creative approach to working through the situation. How you decide to tackle the issue typically depends on how you are wired. Is your dominant thinking style right-brained and creative or left-brained and strategic?

Your cognitive orientation impacts the way you perceive and assimilate data, solve problems, make decisions and relate to others, according to Putting Your Company's Whole Brain to Work by Dorothy Leonard and Susaan Straus. "Cognitive differences are often subtle; people don't naturally appreciate their significance. Managers who dislike conflict or who value only their own approach fall victim to the comfortable clone syndrome, surrounding themselves with people who think alike and who share similar interests and training. But to achieve creative abrasion, you have to make different approaches rub together in productive ways," the authors state.

As a former CPA and salon owner turned industry consultant and educator, Tom Kuhn, owner of Qnity, has seen firsthand how unifying strategic and creative thought improves not only profits, but also culture. "I've seen both the challenges and opportunities that unifying the so-called left-brain and right-brain thinking can present," Kuhn says. "It's an issue in any business, but particularly in salons because of the artistry of the business. For example, a salon that is too heavy in either business or creative can become plagued by poor employee retention over time. While the reasons are different, the result is the same: costly turnover. Finding and using tools to unify both â€˜sides' of the business is vital to the success and satisfaction of salon owners, managers and their teams."

According to Kuhn, the leadership of any company needs to produce three results: profitability, great culture and a competitive edge. "You could be highly profitable, but have a culture with a lot of conflict and drama, or you could have a fantastic culture, but be up late at night, because you can't make payroll-to achieve all three results you have to bring together your creative and analytical corporate thinking."

Most individuals have a tendency toward one or the other, and often businesses gravitate toward the skill set and passion of its founder. "While I was working with some of the most successful salons in the country over the years, it struck me that those who are most profitable constantly and consciously work to keep their companies from being either too creative or too â€˜corporate,'" says Kuhn. "Success for those salons came when their leaders surrounded themselves with the right mix of talent."

As a recognizable example of a company that does this well, Kuhn points to Apple. "I'd walk through the mall during the depth of our economic strife, and notice most stores were empty, except for the Apple store. The critical factor in this company's success is its strategic/creative balance. Not only does it have outstanding innovation with products its competitors can't touch, it also is scary tight in its operations. Look at customer service, shipping, technology use, etc. Apple epitomizes what's possible when the left and right brains of the business are unified."

As companies work to unify the two cognitive sides, Kuhn believes they often cycle between their leanings depending on the management's current initiatives. "But gradually, you end up with a balance and rhythm between the creative and business parts of your business that will drive your success," he says.

Read the second part of this story, 8 Ways to Unify Business and Creative